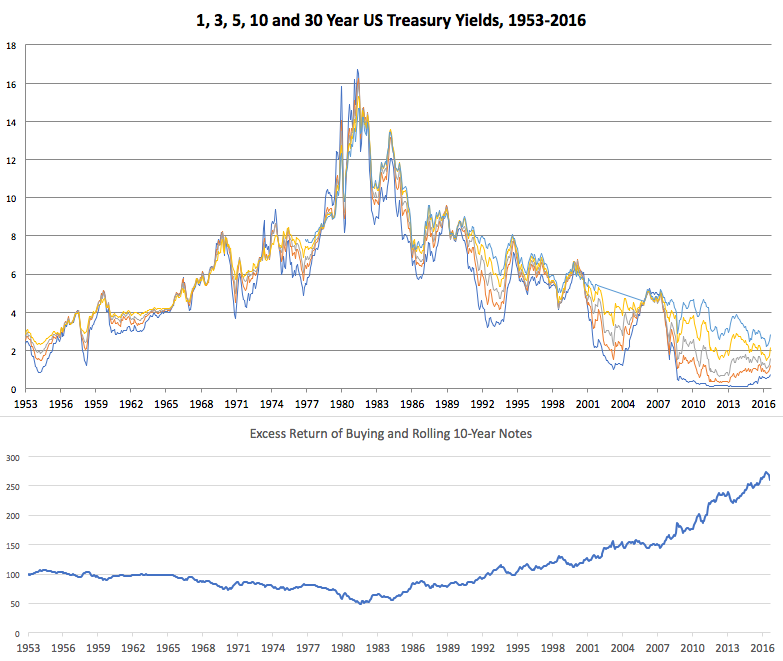 I love long-term charts, and recently started re-reading the 5th edition of Jeremy Siegel’s classic “Stocks for the Long Run“.  Being naturally curious, I also like to keep an eye on how investments in “Bonds for the Long Run”, “Balanced Portfolios for the Long Run” and “Alternative Investments for the Long Run” would do.  Siegel’s book shows that stock returns have outpaced bond returns over any long enough period of time (at least in the US market), but I have found that bonds and bond+stock portfolios have actually performed better since 1980, especially when risk is taken into account.

Below is a chart of the term structure of US interest rates from 1953 to 2016, and below the “excess return” (that is, return over and above what you would have earned in interest just on cash or T-Bills) of buying and rolling a position in the 10-year US treasury note.  Note that bonds provided no or negative excess return from 1953 to about 1983, but have provided very consistent, low risk returns even through periods of stock market turmoil.  While much of this has been attributed to the “bond bull market” as US rates fell from 16% to 0-2% (bond prices go up when interest rates go down), much of this return, especially since 2008, has come not from falling rates but from the steepness of the curve (difference between long term and short term rates).  As you will notice in the chart from 1953-1983, the problem was not just that rates were rising, but that the curve was flat.  I have often pointed out and illustrated in my workshops that a steep interest rate curve provides room to make money in bonds even if rates stay flat or rise slowly, and that absolutely low rates alone should not discourage having some money in bonds.