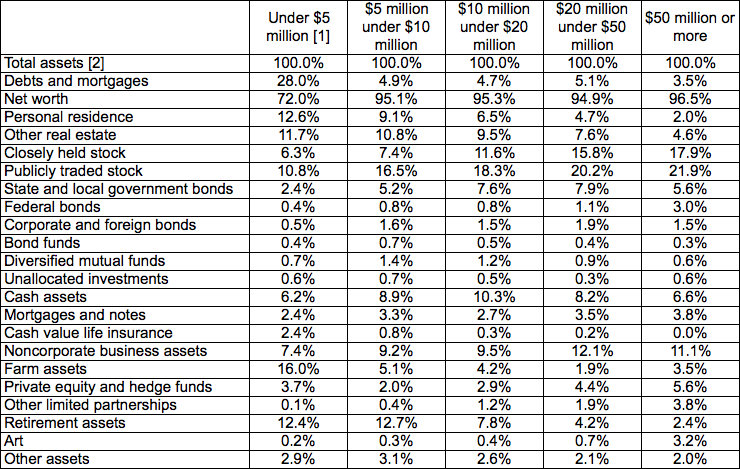 When considering which asset classes to invest in, it makes sense to ask “what do the wealthy invest in?”. First generation American millionaires tend to earn more of their wealth from their investments than directly from their salaries, and so one guide for deciding which of the many different types of investments best build wealth is to see what do the wealthy invest in and continue to own, even after they become wealthy.  Below is a useful table I calculated from the IRS SOI statistics on where the wealthiest 584,194 Americans (about the top 1.7%) hold their wealth.

Reading the below table row by row reveals the following, perhaps not too surprising, patterns:

#3 and #4 are likely to surprise most investors in Asia, who often think of property and insurance as the main places to invest, but US data has shown stock prices have appreciated 7x more than house prices over the past century.

Below is table on the number of households and total amount of net worth covered by these statistics, from the IRS spreadsheet.

Do any of these statistics surprise you, or make you think differently about how much to allocate to stocks vs funds or property?  Looking forward to hearing from you in the form below.

One thought on “What do the wealthy invest in? More stocks than funds or properties, according to the IRS”