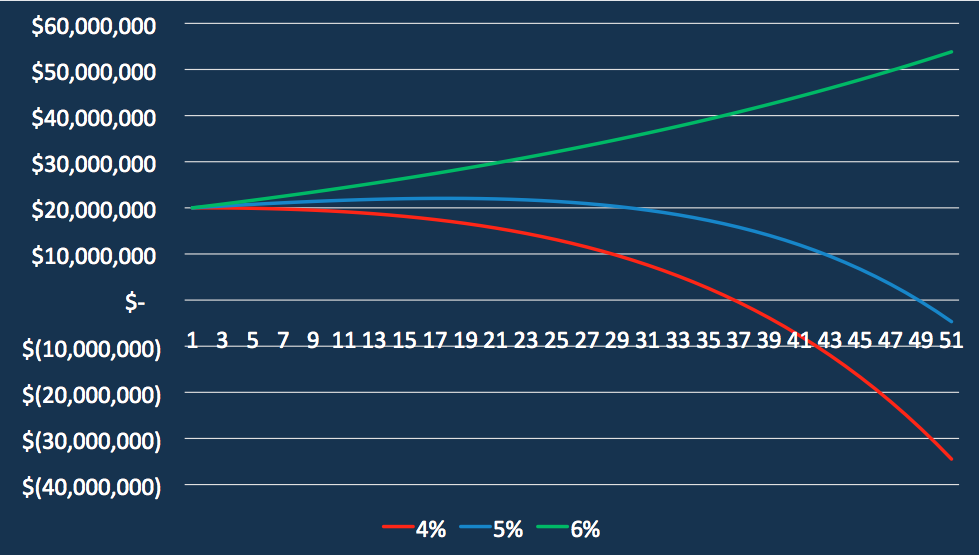 When investing retirement accounts, we are often told to invest aggressively (mostly in stocks) when saving as young employees, and then rotate more and more of the account towards more conservative investments (bonds and REITs) as retirement approaches.  One overly simple rule is to allocate 100 minus your age in stocks, so that a 20 year old would allocate 80% to stocks and a 60 year old 40% to stocks (and in both cases, the remainder in bonds) when investing retirement accounts.  This rule is very easy, even for those with no financial education, to implement with low cost Vanguard mutual funds or ETFs, and makes some sense based on the conservative plan to save enough money to last to age 100. The problem with this approach is that it leaves most retirees invested too conservatively, with too much in low-yielding bonds and not enough in higher returning assets (e.g. stocks and REITs) to keep the retirement account growing and keeping pace with inflation.  A 70 year old investing 70% of a retirement account in bonds may have made sense when bonds had a real yield (that is, a interest rate over the rate of inflation) of at least 1-2%, but many short-term government bonds in the developed world now yield less than the rate of inflation.  A 4% nominal rate of return may be enough for an investment time horizon of less than 10 years, but a 70 year old American male is expected to live to age 84 (on average), and a 70 year old Asian woman is likely to live several years more.

1/ The retirement account earns 4% per year on average (red line), and runs out of money after 37 years

2/ The retirement account earns 5% per year on average (blue line), and runs out of money after 50 years

3/ The retirement account earns 6% per year on average (blue line), the account has a balance of $55,000,000 (almost 3x the initial balance) even after the increasing annual withdrawals.

The difference in rates of return can partly come from lower fees (for example, replacing the Hang Seng tracker fund with a 1.2% fee in most MPF plans with the 0.1% ETF), but also from investing retirement accounts in somewhat more aggressive allocations, with longer dated and higher yielding bonds, high quality stocks, REITs, and other assets.  Over long periods of time, being too conservative and keeping too much in cash is far riskier than taking some market risk to earn higher returns.  This is very well explained in detail in the classic book Stocks for the Long Run.

I look forward to hearing from you and discussing how we can help you earn higher returns when investing retirement accounts.

One thought on “Investing Retirement Accounts: What rate of return vs level of risk to aim for?”