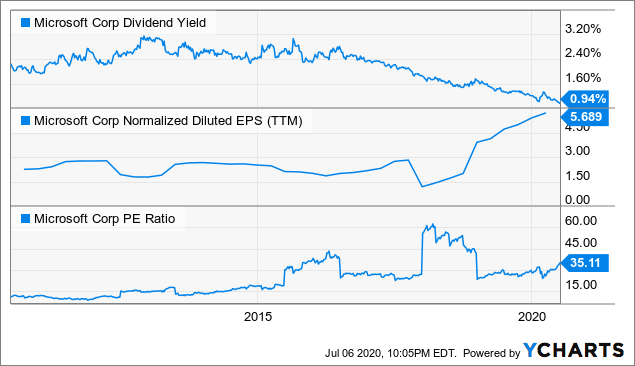 I’ve never considered myself the type of investor that tries to look for “the Next Microsoft”, but by that, I mean I don’t try and look for seed stage start-ups thinking they will be the one that can beat the odds and grow from zero to billions with seemingly little resistance. Over the past 10 years though, Microsoft has offered an example of how to earn more than 1000% return over 10 years (a rate of around 27%/year) from the base of already being a well-established business with less downside than most start-ups. To put some numbers on what I mean by “the next Microsoft”, 2010-2020 edition rather than 1980-2000 edition, the first chart shows how:

Over these past 10 years, a good share of Microsoft’s total return has also come from buybacks, which has had the impact of growing earnings per share faster than Microsoft’s already impressive earnings growth.

By comparison, here is how an investor who bought Microsoft in 2000 would have seen that investment decline in value by almost 30% over the following 10 years, with those numbers being:

Because Microsoft only started paying its first dividend in 2004, Microsoft will not meet the traditional definition of a “dividend aristocrat” until at least 2029.

The lesson seems to be in finding well established businesses priced to still provide a good rate of return with low or even negative growth, and excellent returns with even moderate growth, rather than just hoping to find stocks with the most future growth (and already priced with those hopes). In other words, the famous “Would You Have Invested” photo below is meant to humorously remind us that most investors will not be lucky enough or insightful enough to find “the next Microsoft’s” team around their 1980 start-up stage, but it should be easier and more predictable for many of us to find good companies with numbers like Microsoft’s in 2010.