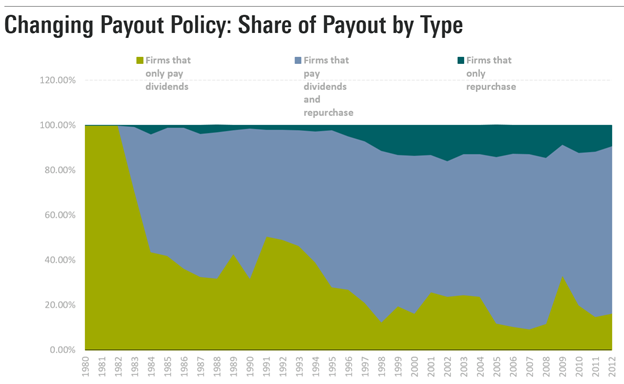 Although I have long considered myself a fan of “dividend investing”, I am just as aware that not all dividend dollars are equal in quality, and so often look at “dividend alternatives” as part of the “total shareholder yield” picture. “Total Shareholder Yield” often refers to the sum of ways profitable companies can return cash to shareholders, which includes not only dividends but also buybacks / share repurchases, and paying down debt. Higher quality companies are often better off reinvesting more of their cash into their own high-ROI businesses (especially in the case of “compounders”) than paying this same cash to shareholders. Acquisitions are another use of cash deserving a whole different article.

Today, I wanted to share this insightful image tweeted by Morningstar, showing the relative percentage of firms that only return cash to shareholders through dividends, versus companies that use only buybacks or a combination of dividends and buybacks. Back before 1982, a dividend was the traditional way companies distributed profits to shareholders, and dividends were what investors traditionally expected for the risk of owning stocks. In 1982, SEC rule 10b-18 specified “safe harbor” rules for companies to buy back shares and not be liable for stock manipulation. Over the following 15 years, the percentage of companies paying dividends but not buying back shares seems to have fallen to less than one quarter of the number of companies using dividends alongside buybacks, or in some cases, buybacks alone. Although many seem to consider this a mostly US phenomenon, I also see significant buyback activity in many other markets including Japan, Europe, and even many emerging markets. Buybacks are sometimes considered a tax move, since it increases the share of the company owned by remaining shareholders without forcing them to take an often taxable dividend, but in theory also means that the company believes its own shares are relatively undervalued. That is why I generally like investing in companies that are both able and willing to buy back their own shares, and place buybacks as a valuable “dividend alternative” between the more traditional “pure dividend” payers and “compounders”.

Two more interesting pieces of reading this week I find related and worth mentioning here:

1. I was pleased to be introduced to the author of the book “Back to Business“, which seems to look at an alternative to modern portfolio theory more centered on dividends than on stock price fluctuations. I look forward to reading this book, and

2. On the topic of Tesla’s recent share price surge and issuance of another $2 billion in TSLA shares (this is the opposite of a buyback, and I have often criticized Tesla for making more money from selling its shares to investors than from selling cars to customers), I was kindly forwarded this article on the history of short squeezes.