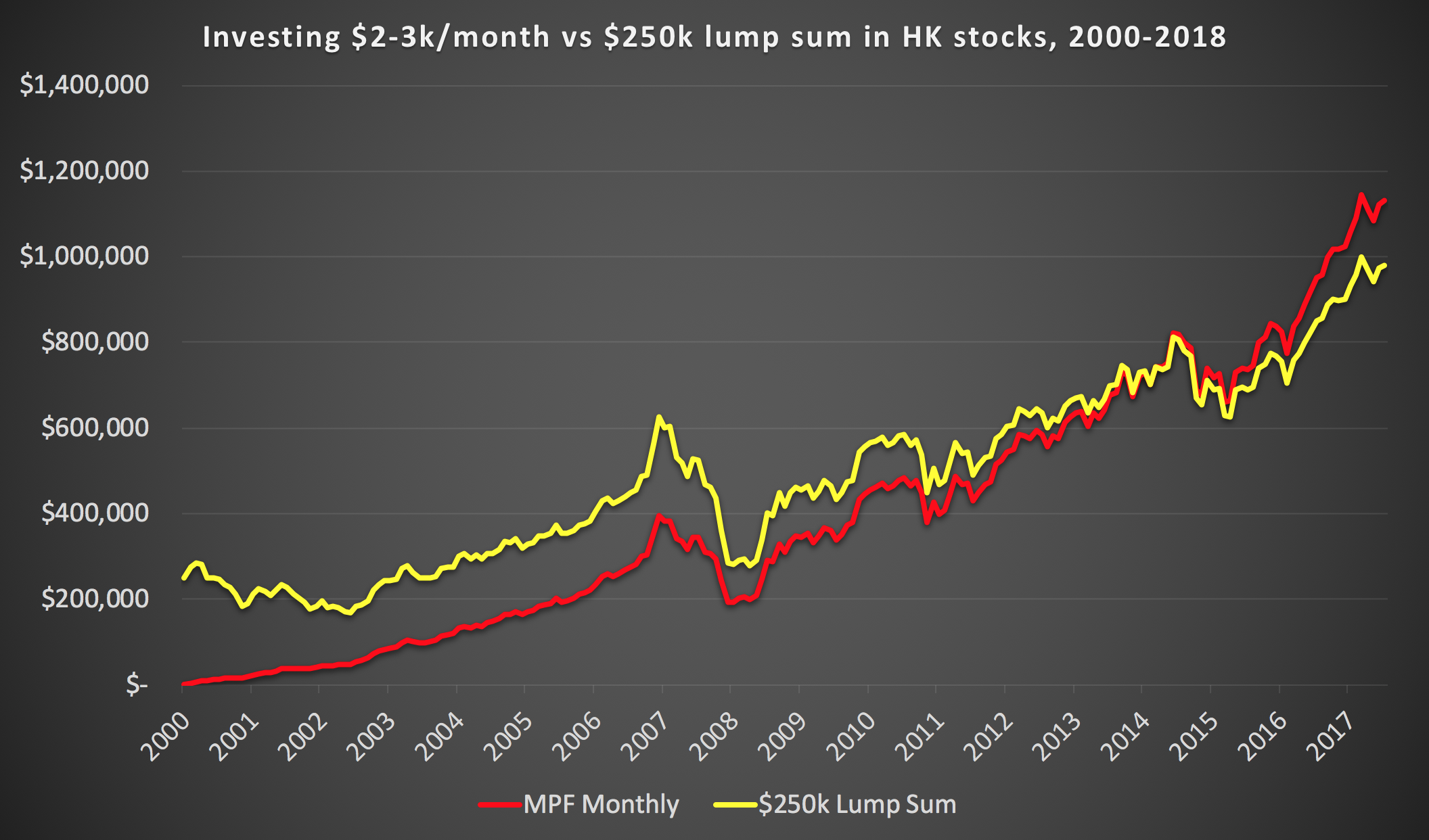 If you have worked as a professional in Hong Kong since the first MPF scheme was launched in December 2000, and contributed the minimum each month into a low-cost Hong Kong stock index fund, you should have over $1,000,000 in MPF by now.

MPF stands for Mandatory Provident Fund, and is Hong Kong’s equivalent to a US 401(k) or Australian superannuation fund as an employer-sponsored, defined contribution retirement savings plan that is often invested in mutual funds. Hong Kong law requires employers and employees in Hong Kong to each put 5% of the first $30,000/month of an employee’s salary (raised from $20,000 from 2000-2012 and $25,000 from 2012-2014) into the employee’s MPF fund.  The below chart shows how these minimum contributions of $2,000-$3,000 per month, every month, since December 2000 (red line below) should have grown to over $1,000,000 by now if invested in a simple, low-cost, Hong Kong stock index fund (I used EWH as an example due to the high-quality, long-term total return data on the iShares website).  These monthly contributions would have totalled less than $500,000, so this monthly savings strategy would have roughly doubled the amount invested over an average of 9 years, compared with the how a lump-sum investment of $250,000 would have returned 4x over the same period (yellow line) with more ups and downs.

According to page 8 of this MPF report, the average MPF account balance was not yet over $1,000,000, but was rather only around $150,000 as of 2016.  The obvious reasons why Hong Kong MPF participants have less than a million dollars include:

While reasons #1-3 are of course significant, I suspect the bigger ongoing problem for workers who do have the full $3,000/month going into their MPF are reasons 4 and 5: investing too conservatively, and paying way too much in fees.  An extra 1% per year in fees (common in many MPF funds) is over $10,000/year taken out of a $1,000,000 MPF account, and can easily cost a saver half or more of what they should have accumulated over a working career.

Hope this has inspired you to take a closer look at how your MPF is invested.  As always, I look forward to your comments and questions,